We will take a look at some of the important numbers needed to analyze the MLB playoffs at a high level.

Keep in mind, that we will be providing game numbers and analysis for select plays each day throughout the post-season.
We will first take a look at the various odds available at 5dimes.com and the money line should be according to Fangraphs and 5dimes as of October 4th at 9AM MST. 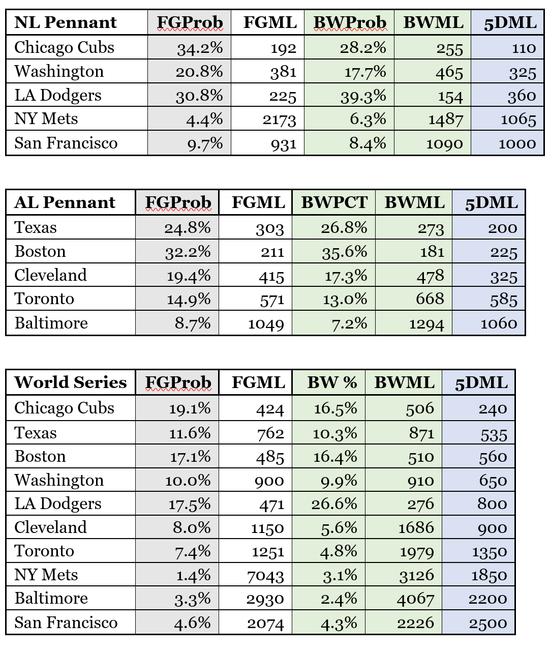 Offensive Ratings
Let’s quickly take a look at the offenses for all ten teams for four categories. The Basewinner run number is what we are showing here. This number is a runs created plus based projected number.

What this number shows is the projected performance of the team’s projected offensive lineup for each category compared to league average. This is projected for each team at a neutral park and assumes 75 degree sunny weather and no wind.

So let’s look take an example from the chart to show what this number signifies. The Houston Basewinner run number for Away vR, it is 103.

What a 103 means is that based on Detroit’s lineup projections and our ratings that go into this category, they will produce at 103% of league average. 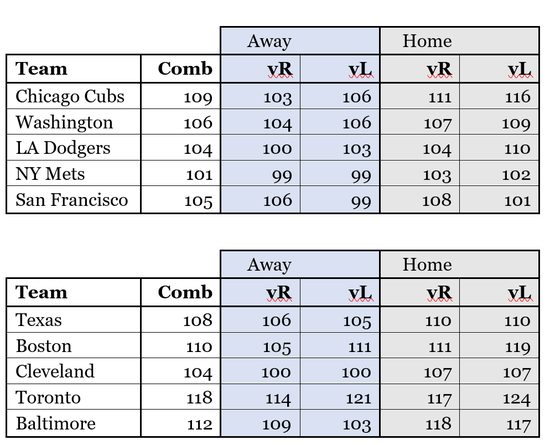 These are simply the team’s raw offensive number projections.

On a daily basis, our software “Crunches” these raw numbers with the other pertinent numbers involving pitching, park factors and umpire ratings to give us the true probability line for each game.

Bullpens
These are perhaps the most important numbers to know as post season success relies on quality pitching from the pen.

Again, our numbers are scaled to a runs plus number so we can easily use them in our probability calculations. For pitching and defense, the lower the better.

The first columns are for the overall bullpen and the second set (tp) is for the top half of the pen (closer and the two set up guys) which is a bit more relevant for the post season games. REC is for last 30 and Proj is our long term bullpen projection.

It is interesting to note the high quality of the majority of these teams. 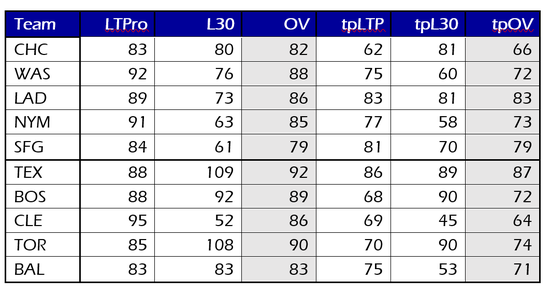 Starting Rotations
These are our projected numbers for the starters for each team. Again, the overall number combines the L20 Basewinner Adjusted Run Number with our pre-season projection to league average on a run basis. We have broken the numbers down for Home (adjusted for park factors) and Away. The lower number is better and predictive of future runs allowed. If there are less than 20 starts for the starter the L20 is just the number of career starts in each category.

Very solid talent but just a bit over valued by our numbers. Nothing wrong with an 89 overall which ranks them number 2 in a tight grouping of four teams behind the Dodgers.

The Basewinner numbers love this rotation and rate them #1. It is hard to argue with them with the best pitcher in the game, Hill who has been outstanding and exceeded expectations TY and Urias who we project to be fierce. This is the most important aspect of the game and their team total beats the next best team by 12 points.

The health of Strasburg is a stinger to this team’s chances. While we like Scherzer, CK has him by 20 BAR pts which makes him look human. Roark is the #2 at a BAR of 111. That is the third worst #2 BAR in the playoffs and will hurt National chances.

The BAR on Moore is poor and that is a concern if you like the Giants. The collection is a 97 which puts them worst in the NL starting rotation wise.

The rotation that carried this team last year is injury depleted and Thor is about 5 points off his LY BAR. We still like him at a 77 but the rest of the collection does not inspire.

A very good 1-2 punch and the BW numbers actually slight Ricky P’s body of work a bit. Buchholz looks like he is better served OTR where he is average. Best rotey in the AL by current BAR.

Arguably the best 1-2 combo in the game when healthy. However, the 3-4 guys sport dual unlucky 113’s OTR and this is where they will be projected to pitch.

This rotation is banged up at the wrong time. Two BW top 20 guys are missing and despite our solid rating on Tomlin that stirs up venom from the baseball hipsters, we still rate the unit collectively as a meh. Terry Francona is going try to get the most out of Kluber but his groin strain is concerning.

I’m actually surprised that this unit is rated even this low at 101 as we have not had much love for Tillman over the years. Interesting to note Miley’s splits which have mainly been bolstered by his outings at Camden.

The worst rotation overall by BAR standards but we like Stroman much better than Tillman and think the Wild Card price is correct.

Individual Series Win PCT Projections
We simulated each potential playoff series to create our LCS and World Series projections. We thought we would share the projections prior to the playoffs starting. The first chart is Win probability by percentage.  The second chart is money line calculation.

You read from left to right so BAL win probability vs. Boston is 34.9%. If you are a member you will get all info on the charts. Keep in mind projections during the playoffs could change a bit due to starting pitchers, lineup changes and other factors. 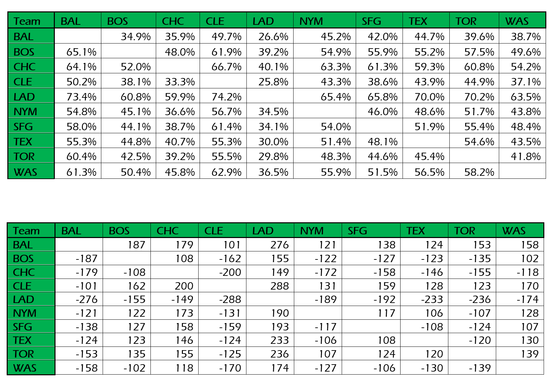 Conclusions
We backed the Dodgers and Tribe prior to the season with team win totals over. Will our thoughts change?

Chicago Cubs
The Cubs are no doubt a solid contender. However, we feel that they are a bit over valued and will have their hands full if they play the Dodgers with the Dodgers outstanding rotation.

LA Dodgers
Our playoff fate will be decided by the Boys in Blue as we like them in several ways. Fangraphs projects value with them and we project even more. The combined rotation is the best at the current time (considering other team’s health) by our numbers by about 12%.

Washington
Our numbers show the price is way too low to bet this team. Part of this is their NLDS match vs. the Dodgers and the rest is the health of Strasburg, a BW top 5 starter

San Francisco
We are close to agreement with the books and the Saber men on this one. We have their overall pen as number 1 in the playoffs but their rotation as a whole is worst in the NL. Passing on any kind of commitment here.

NY Mets
One and done is what we are betting on although they do have a 46% chance to get the honor of facing the Cubs which they will only have a 37% chance to win. Injuries have bit this team and they should exit early.

Texas
We think they are overvalued and will try to fade a bit if the market presents an opportunity. Nothing wrong with #1 and #2 starters but overall pen is ranked dead last of remaining contenders and the remaining cast of starters is uninspiring. Whatever happened to Chi-Chi Gonzalez?? -At least his name was inspiring.

Boston
We are really surprised but the Red Sox show value this year by our projections. Porcello and Price are rated nice and Buchholz and E Rod are not too horrible OTR. Offensively solid this team will get some action from us.

Cleveland
Well, we loved this team when they were healthy but they have lost too much at the top of the rotation. They do have they bets rated top part of the bully but getting there ahead in games will be a challenge. Sadly, we will look to fade despite having them in a win the World Series future.

Toronto
Offensively, we have this team combined at a very solid 6% better than the next team. However, the rotation is #10 of 10 and starting pitching is the cornerstone of post-season success.

Baltimore
Baltimore is similar to Toronto with #2 bats but the #9 starting rotation. We will look elsewhere.

1 unit to win 4
399655403-3   +400 National League Pennant – Los Angeles Dodgers
Tough to pass up this value with the deepest rotation in the game. This is a gift price. The baseball hipsters are talking about the Dodgers poor year vs. LHP but we think this is a statistical aberration. An unlikely situation where a group of batters with established and a large LHP hitting sample all had down year at the same time.

Risk 2 units to win 2.34
Two team fade parlay:
25206 Field wins American League Pennant -405* vs Cleveland Indians win AL Pennant  (Fixed Price)
25102 Field wins National League Pennant -135* vs Chicago Cubs win NL Pennant  (Fixed Price)
Cubs are not surprisingly over-priced and the Indians health woes have come at the wrong time. We love the Dodgers if they match up with the Cubs so this is as much a pile up on LA as it is a play against Chicago.

Combining the best of the odds disparities for a big return.

Hope this helps your betting and handicapping endeavors!

Database Winner is an analytics team led by Mark “Basewinner” Borchard. Mark has spent the past 10 seasons analyzing individual Major League Baseball games and developing predictive data sets. Armed with a team of computer programmers to build a game prediction and player evaluation product, "Database Winner" has now set its sights on NFL Football and EPL Soccer, crunching together advanced metrics from Football Outsiders, Pro Football Focus, Squawka, and other top analytics sites to project a true line for every game on the board.

After adding Trea Turner, do the LA Dodgers have the best lineup in MLB history?
August 18, 2021

October Baseball is The Greatest Game on Earth
October 6, 2018

Is it the Year of The Favorite in Baseball?
March 28, 2018
ATN Tweets
Go to Top
Featured Package